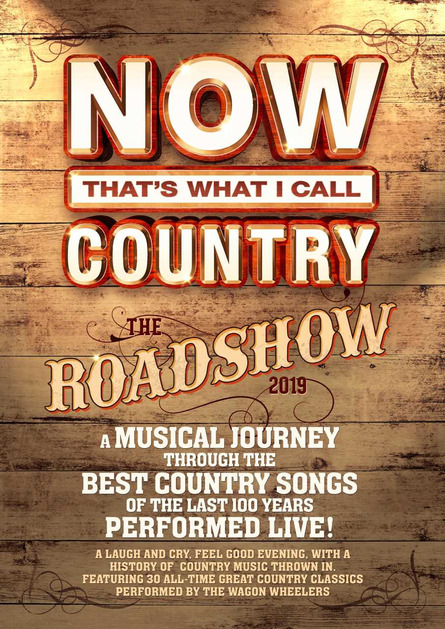 Now That’s What I Call Country

This is a journey through the last 100 years of country music where the audience get to pick which songs are played via a giant wagon wheel of fortune - a spinning songbook featuring the country classics from the ‘Now’ compilation.

There will be full audience participation each night where the audience ‘write’ a song with the band drawing on their personal experiences which they share on the night.

This is a laugh out loud, feel good gig with a history of the country song thrown in. The audience will be dancing in the aisles, shedding a tear in tender moments and will leave with a song (that they have co - written) in their hearts. Now That’s What I Call Country Music!

The producer Ian Brown was nominated for an Ivor Novello Award in 2007 for co - writing the world wide number one hit ‘I Wish I Was A Punk Rocker’ and co - wrote the lead song in the long running musical and album series Dreamboats and Petticoats .He has also written songs for Fisherman’s Friends, Show Of Hands, Tom Baxter, Jason Donovan, D Side, Pixie Lott, Graham Gouldman, Henry Priestman, Simon Webbe, Drumsound & Bassline Smith and Don Diablo.

He is co producer of the new British movie ‘Fisherman’s Friends’ which is out on March 15th 2019. He is music consultant for the new country music film ‘Wild Rose’ starring Jessie Buckley and Julie Walters, which is released on April 19th 2019.