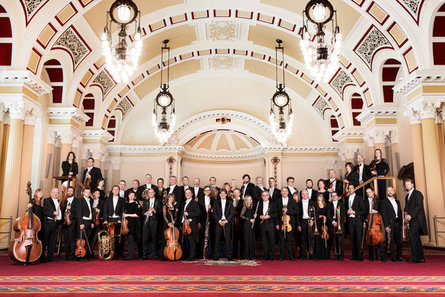 Please purchase the Concession ticket for the Under 24's directly from Box Office.

Gemma New, Principal Guest Conductor of the Dallas Symphony Orchestra, conducts a concert packed full of melodic sparkle and loaded with enough rhythm to help you dance your way through the end of the winter months! Stravinsky’s Danses concertantes was composed as a concert piece, but with the input of a choreographer – just listen and imagine the poses and gestures of a corps de ballet.

Ibert’s Concerto for Flute is one of the great showpieces for the instrument. The opening movement is breathless and fleet-footed, the contrasting central movement full of lithe and sinuous arabesques and the finale a jazz-laden firework display of technical ability. Adam Walker, Principal Flute of the London Symphony Orchestra, is the perfect agile and elegant soloist for this performance. A pause for breath. Taking its heritage from both medieval music and the tradition of 20th century work such as Barber’s Adagio for Strings, Aaron Jay Kernis’s Musica Celestis is shimmering, hymn-like and utterly tranquil. Mendelssohn’s Italian Symphony is a musical postcard from the happy, buoyant composer as he travelled in the Mediterranean. It shines with the sunshine of Italy and draws on traditional Italian dances such as the saltarello and tarantella for its fizzing finale.