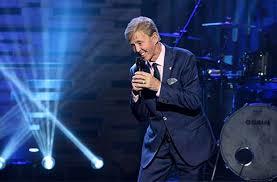 Dickie Rock is one of Ireland’s most loved and recognised singers has decided to call it a day. However still attracting a huge following of fans from all around the world. He is still performing to full houses out venues throughout Ireland and Europe for over fifty years and is still going as strong as ever!! From 1963 to 1983, Dickie had 25 Irish hits, surpassed only by the Beatles, Elvis Presley, Cliff Richard, David Bowie and the Rolling Stones. During his time with the Miami Showband, Dickie attracted the kind of mass hysteria normally reserved for boybands like Westlife.

As Dickie himself says: “Music is in my blood. I could never imagine doing anything else.” But all good things come to an end and so after over 60 years in the entertainment business, it’s time to retire from touring. Just for Old Time Sake….. will see Dickie and his full band perform all the hits that made Dickie Rock a household name it will be a chance on the final tour for his loyal fans all over the country to say good bye Just For Old Time Sake.