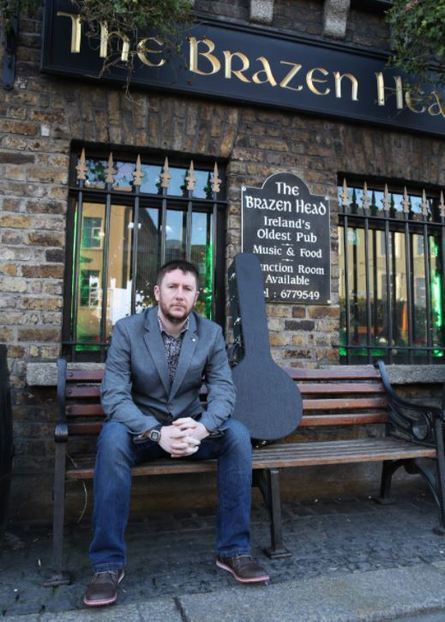 ‘His powerfully unadorned vocals might be from any era, variously recalling Paul Brady and Andy Irvine…it’s a powerful statement.’ **** Mojo

He has gone on to appear at festivals across the world and in February 2018 he toured with The Transatlantic Sessions.

His third album ‘A Lifetime Of Happiness’ (2019) was produced by Dónal Lunny. Reviews confirmed that this is yet another leap forward for Daoirí resulting in four nominations in the RTÉ Radio 1 Folk Awards 2019

‘Just occasionally you come across a singer so talented, so natural, that you feel you might as well give it all up and just listen in awe. Such a one is Daoirí Farrell….’ Living Tradition

His Youtube video of The Creggan Whire Hare has close to 2 million views and the video of his ad hoc performance in a UK airport has over 12 million Youtube views.

Within days of lockdown, Daoirí began livestreaming. The first concert resulted in 49,000 views. Daoirí performed a further 24 ‘Corner Sessions’ weekly at 10pm GMT every Sunday. As a result, he has played live on BBC Radio 4's The Today Programme (May ’20), broadcast to over 7m people a week, and became the second artist ever to take 'remote control' of the BBC Radio 2 Folk Show with Mark Radcliffe (June ’20).

He is currently working on a new album with Trevor Hutchinson from The Waterboys producing.

Please click here for more detailed information on how we plan to make your visit to the theatre as safe an enjoyable as possible https://struleartscentre.co.uk/your-visit/covid-safety/

All activities will be undertaken in accordance with Covid-19 restrictions and public health guidance and are subject to change should Covid 19 regulations change.